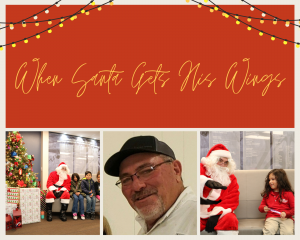 December of every year, like much of the rest of our great country, the staff at Centers for Children and Families prepares to celebrate holiday cheer and season’s greetings with the people we love.  We look forward to the sounds & sights of our local Christmas wonderland—the lighted houses, the gatherings and the laughter of little children.  2020 has been a year of change for so many of us—with a global pandemic and the health concerns that lie therein—things are not quite the same in our world.

For Centers for Children and Families, 2020 has taken its toll on our holiday season in a more profound manner. Our Santa Claus has gotten his angel wings.

For more than 20 years, Centers for Children and Families has hosted Operation Elf, a memorable event for the children participating in Centers’ programs.  It is a whimsical evening filled with holiday delight, including food & festivities that bring smiles to little faces.  Each child receives a special gift from a toy drive which includes donations from our community.  For many of the children involved, this is their only gift and their only celebration—which is why we strive to make it as enchanting as possible.

One of the most magical moments of Operation Elf, is the experience of having that ever-so important chat with Santa Claus, himself.  For the past 15 years, Andy Swinney has been the magic behind the red suit and the fluffy, white beard.  With emerald eyes that sparkled with genuine joy, our Santa welcomed each child with a jovial embrace and a listening ear.  Andy didn’t just listen with patience, he listened with intent.  Part of his life’s purpose was to make sure that people could see the winner in the mirror, and it often started with the children.

The year that Centers thought there could be a gap in finding someone to be the Santa Clause for the event, Andy Swinney—husband of Billing Director, Kim Swinney—stepped up to the plate without hesitation.  It was obvious to all that he would be the perfect fit.  Andy had an infectious zest for life that could force a smile on even the grouchiest of grinches.  It was a gift.

Teresa Cain of Cain Insurance Solutions and longtime volunteer of Operation Elf said, “I can remember tearfully watching Andy interact with children who would come with requests for basic need items at home.  He cared about them enough to listen, give them the gift of hope, and follow through to make sure the team could find a way to help them.  It was the beauty of the true spirit of Christmas unfolding before us.”

Andy had led a life driven by compassion and philanthropy.  His wife, Kim, recalled that the question he asked everyone in his life “What are you?” The question demanded the answer he prompted:  “I’m a Winner.”  He believed there was a winner living in everyone and left that legacy to those lucky enough to cross his path.

In his early career, Andy and Kim started a business designed to create jobs for individuals with intellectual disabilities and made a friend out of every client.  He encouraged people who might have otherwise fallen through the cracks to believe in their own purpose and find the work and dignity he believed they deserved.  He followed many of those people throughout their careers and maintained those truly genuine friendships.

Andy Swinney’s natural-born ability to lift people up made him the perfect Santa Claus for Operation Elf.  His commitment to this task was unwavering—even as the date of the event often landed on his wedding anniversary.  His bride was kind enough to loan her sweetheart on their special day to brighten the lives of the children we serve.  We will always be grateful for this sacrifice.

As 2020 has taken so much from so many, we have all experienced the tremendous loss of our dear friend, Andy Swinney.  We thank our friend and coworker, Kim Swinney, for all they have both done for our organization during the Christmas season and beyond.  As a family, Centers grieves the loss of this incredible human and as the elves at Operation Elf, we know that the best Santa Claus we could have ever asked for has received his heavenly wings.

Andy Swinney made such an impact on the lives of the people he touched, that the Midland Christian High School head football coach, Greg McClendon and Chris McKinney, a previous coach at the school, collaborated to create a professional video for his memorial service.  They recalled the influence he had had on the Midland Christian High School Football program throughout the years—bringing school spirit, dedicated volunteerism, and inspiration to the program.  Listening to these strong coaches with tough exteriors give testimonies through tears in loss of their friend, made it clear that our Santa spread as much joy to others as he did to our kiddos at Centers.

In memory of Andy Swinney, we will be retiring the Santa Suit at Operation Elf this year and the elves will continue his legacy of Christmas magic.  If you would like to help keep Andy’s legacy of the “Spirit of Santa Claus” alive and show our special kiddos that they are all winners of our world—we encourage you to donate to our Operation Elf this year.  Andy Swinney will, undoubtedly, be smiling down at us from his special Santa Suit in the sky!

Recently, my family and I rode on the public transportation train system in Dallas. We encountered a young man, not older than twenty, who was holding a broken suitcase and a garbage bag full of belongings. He looked frantic and scared. The train was crowded and there were no seats.

Interpersonal relationships are complicated and as a therapist you often see individuals struggling from a break-up and questioning “what happened?” and “how will I move on?” It is rare when a relationship ends on good terms and both individuals involved are able to ask questions and receive the answers they need in order to move on. Closure does not usually happen with the help of an ex, it has to be self-discovered.

You are probably asking yourself, “What is a Mandala?” The word “Mandala” is Sanskirt for circle or completion and it can have many meanings. Buddhists and Hinduists see mandalas as representing the universe. Forms of mandalas in Christianity are rose windows, the Celtic Cross and the crown of thorns. Psychoanalyst Carl Jung has referred to mandalas as representations of the unconscious self.

Starting in the beginning months of life, infants learn to say their first words. Most believe this marks the beginning of their journey through communication with those in their environment. Interestingly, communication occurs prior to when these words are uttered. It is through tears that the newborn learns to communicate his/her basic needs.